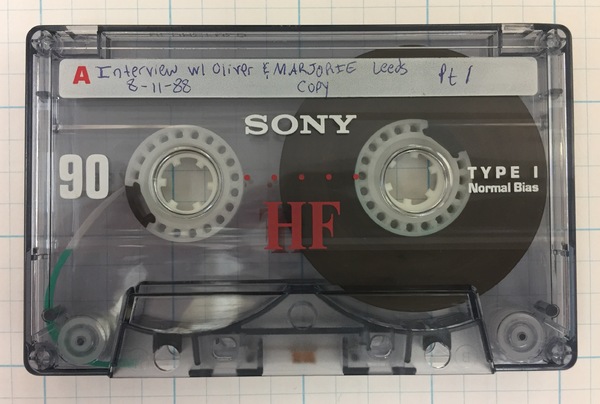 In the first recording clip, Oliver Leeds recalls how he and his wife Marjorie were introduced to Brooklyn CORE in the summer of 1960 when she was recruited by National CORE to lead sympathy strikes in local Woolworth’s in support of the lunch counter sit-ins in Greensboro, NC. In 1960, National CORE experienced a revival and created new CORE chapters by capitalizing on a nationwide wave of sympathy strikes against F.W. Woolworth and other five & dime chains whose restaurants racially segregated African Americans. The Woolworth protests played an important role in recruiting a handful of locals who eventually became members of Brooklyn CORE. Marjorie Leeds, a former communist, and Robert Palmer, a reform-minded community activist, led an interracial group of reform-minded activists with varying religious and political affiliations.

In the second recording clip, Oliver Leeds discusses how the the housing discrimination case at Lefrak Organization caused the downfall of Robert Palmer. "In 1961, Brooklyn CORE took a new approach to the housing issue. They decided to investigate a large real estate firm for racial discrimination. Lefrak Organization was the perfect target, as it was the largest housing developer on Long Island, Queens and Brooklyn. During negotiations between Brooklyn CORE and Lefrak, CORE members began to dislike the tactics of Robert Palmer. Oliver Leeds a member at the time describes Palmer as “an NAACP type. He didn’t mind negotiating, but he certainly looked at direct action with an jaundiced eye.” Palmer refused to participate in direct action such as sit-ins and picketing. After the third unsuccessful attempt of negotiations with Lefrak, Palmer was removed as chairman. In January of 1962, Oliver Leeds was appointed chairman of Brooklyn CORE. His leadership gained success with Lefrak. CORE became a more organized and well developed organization because of Leeds.

The material on this website is protected by copyright and/or related rights. All audio and photographic material is reproduced from the Brooklyn Public Library Civil Rights in Brooklyn Oral History Collection, and other collections. While access to many items in these collections is unrestricted, we do not own reproduction rights to all materials. Items may be used in any way that is permitted by the copyright and other rights related legislation that applies to the specific use. The user assumes all responsibility for rights related questions.